About the Atmega32u4 Breakout board+

We like the AVR 8-bit family and were excited to see Atmel upgrade the series with a USB core. Having USB built in allows the chip to act like any USB device. For example, we can program the chip to 'pretend' its a USB joystick, or a keyboard, or a flash drive! Another nice bonus of having USB built in is that instead of having an FTDI chip or cable (like an Arduino), we can emulate the serial port directly in the chip. This costs some Flash space and RAM space but that's the trade-off.

The only bad news about this chip is that it is surface mount only (SMT), which means that it is not easy to solder the way the larger DIP chips are. For that reason, we made a breakout board. The board comes with some extras like a fuse, a 16mhz crystal, USB connector and a button to start the bootloader.

Why not use a Teensy

We've also carry a similar board from PJRC called the Teensy. The Teensy uses the same chip so you may be wondering, why did we design a different-but-still-basically-the-same board? We've used the Teensy in a few projects and like it a lot but there are a few details that we wanted to change. We wanted…

That doesn't in any way mean that it is better or replaces the Teensy. Here are some reasons we will still use the teensy for many projects 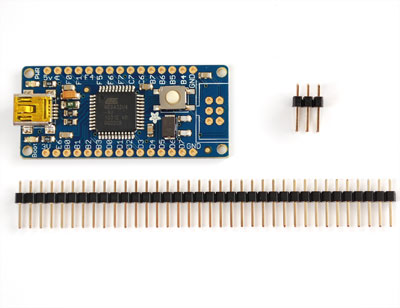 The breakout is almost completely assembled. We don't solder on the header or 6-pin ISP connector since we find its easy to do but hard to undo, in case you want to put different headers on, or just connect up wires directly.

The board ships with a strip of header, you can simply break the header into two pieces and place them in a breadboard 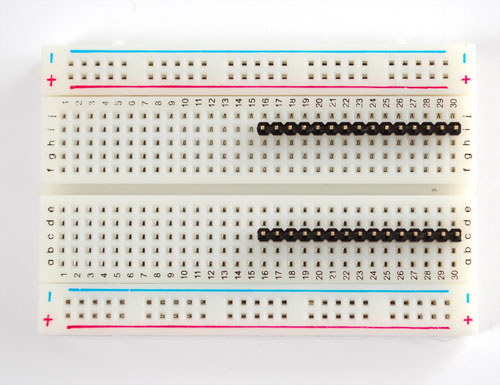 Then place the board on top and solder it in place

This breakout board is designed to make it easy for you to get started with the Atmega32u4, a USB-native 8 bit AVR microcontroller. We tried to keep the design simple, while taking care of all the details so that you can focus on your project's firmware and hardware.

The main chip is an ATmega32u4, an 8 bit AVR-core processor which has the bonus of a USB core built in. This makes writing USB native programs such as serial ports, mouse/keyboard, mass-storage-controller, MIDI, etc very easy. The chip has 32K of flash and 2.5K of RAM. The microcontroller is clocked at 16 MHz with an on-board crystal.

The board is powered by the USB port at 5V. There is a 500mA polyfuse to protect your computer from a shorted circuit. If you'd like to run the board off of another voltage, you can do that by cutting the VCC solder jumper bridge underneath and connecting an external voltage to pin #2 of the ISP header. Note that running the board at 3.3v @16mhz is considered overclocking. We do it for prototypes and it seems to work fine but its out of spec!

There is a 3V pin from the microcontroller's internal regulator (USB signals are at 3V) you can use this for maybe 10mA or so, it might work as a reference voltage)

The bootloader will time out eventually (after about 10 seconds) Because we are not using a USB/serial converter, bootloading is tremendously fast, we can program a full chip in under 2 seconds!

If you're using windows, you will need an inf driver file, you can download it below (in the Downloads section)

The very nice thing about this chip is the USB core built in which makes USB-device development easy. What makes it even easier & better is the full USB stack already written for you by Dean Camera. Called "LUFA", the package comes with tons of working examples for all sorts of USB devices and its compeltely open source. We use the firmware as a 'starting point' which we then expand upon. Please check it out and if you find it useful consider donating time (fixing bugs, improving documentation) or funds to Dean.

If you are looking to use Teensyduino (a fork of the Arduino IDE that supports the 32u4 chip) exclusively we suggest using the Teensy board as it supports auto-reset. However, if you've found some code such as one of our Teensy projects that you want to have work with the 32u4 breakout board, this can get you going

If you're running Windows, you can just download this ready-to-go zip package. Uncompress it and inside will be an Arduino IDE that has all the following steps already done

If you're running Mac OS X, you can just download this ready-to-go dmg package. Uncompress it and inside will be an Arduino IDE that has all the following steps already done

We'll need to tell the IDE about this breakout board. Open up Arduino IDE/hardware/teensy/boards.txt

Add the following text to the end of the file, save it

Arduino uses a really old version of Avrdude from 2007, before the chip existed. So we'll need to update it.

If you're using Linux or Mac, just copy the avrdude.conf file

Open the file Arduino\hardware\teensy\cores\usb_serial\usb_private.h and find the lines

and change it to

If you are running the Arduino IDE, quit and restart

Now you can select the Atmega32u4 breakout board from the Teensyduino Boards menu.

You don't need to run the Teensy loader as avrdude works perfectly well on its own. You will need to press the bootloader button before uploading as we don't have an auto-reset function like the Teensy does.

There's a project on github which allows to compile to this target using the Teensy library, without installing a full Arduino IDE + Teensy files.