The LCD has 4 backlight white LEDs in parallel. We use a 22-68 ohm resistors (the image shows 68, the value may change depending on how bright the TFT backlight is for the current model) on each Cathode (K) and drive the cathode with a NPN connected to pin PC6. You can dim the backlight by changing the hardware PWM value of the pin. When off, the display is not visible - it is transmissive, not transflective.

Both MicroSD and MicroSD High Capacity cards are supported.

Here is a copy of the bootloader, makefile and a bat file to show how we program microtouches 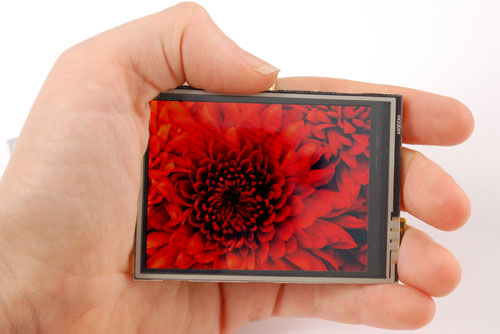 Troubleshooting: The files on the SD card might not show up immediately upon bootup. When using cards 2GB or larger, if the image icons do not appear, go to the HWTest app and ensure that it confirms the card is ready. After leaving the HWTest app, the icons appear.