The most common and inexpensive plugpack power supply type you'll see is the chunky transformer based plug. Whenever you buy some consumer electronics you'll be getting one of these These guys are everywhere - all sorts of voltage and current ratings. They're available for sale at any store just about, but there are some big things to watch out for! One is that the output voltage is not going to be 9V (for example) out of the box, that voltage rating is just the minimum output for the current rating (200mA for example). And also, the output is going to have a lot of ripple on it!

Before we talk precisely about these guys, lets go back in time to when engineers had to build their power supplies with their bare hands!

Back a couple decades ago, the only way to build a power supply was to start a big chunky 120VAC/12VAC transformer. The transformer was used to bring the high voltage from the wall down to a less dangerous level. Then diodes and capacitors were used to turn the AC into DC. 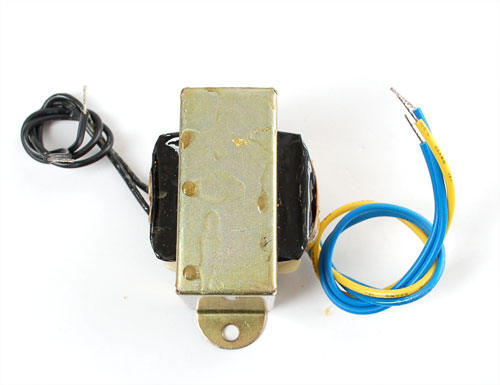 We aren't going to get into the heavy detail of the electromagnetic theory behind transformers except to say that they are made of two coils of wire around a chunk of iron. If the number of coils are the same on both sides then the AC voltage is the same on both sides. If one side has twice the coils, it has twice the voltage. They can be used 'backwards' or 'forwards'! For more detailed information, be sure to check out the wikipedia page 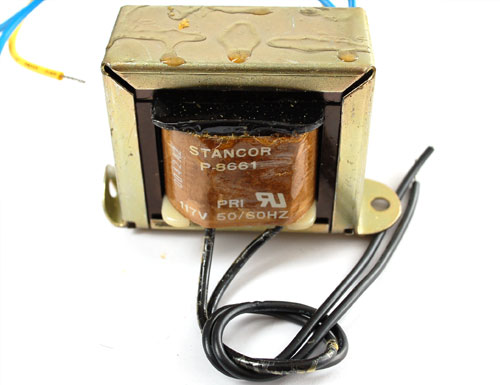 To use it, one half would get wired up to the wall (the 'primary' 'high side') 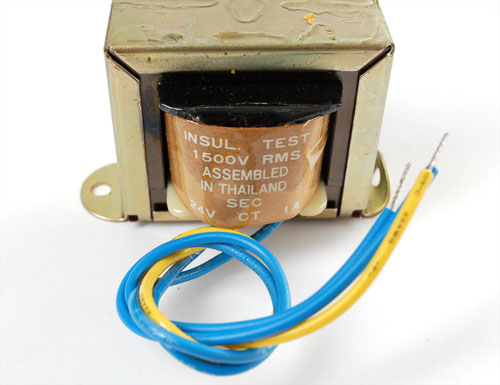 and the other half would output 12V AC (the 'secondary' 'low side'). The transformer functioned in two ways: one it took the dangerous high voltage and transformed it to a much safer low voltage, second it isolated the two sides. That made it even safer because there was no way for the hot line to show up in your electronics and possibly electrocute you.

We'll use a schematic symbol to indicate a transformer, its two coils inside which are drawn out, the schematic symbol will have the same number of coils on either side so use common sense and any schematic indicators to help you out in figuring which is primary and which is secondary! 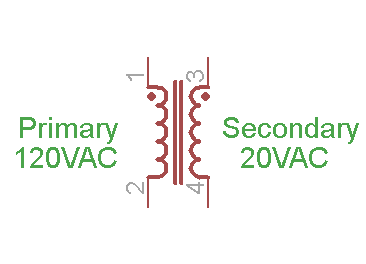 Now that the voltage is at a non-electrocutey level of around 12VAC it can be converted into DC. The easiest and cheapest way to convert (also called rectify) AC to DC is to use a single diode. A diode is a simple electronic 'valve' - it only lets current flow one way. Since AC voltage cycles from positive to negative and we only want positive, we can connect it up so that the circuit only receives the positive half of the AC cycle.

You'll want to use a power diode such as a 1N4001, they're extremely common and can put up with a lot of abuse. The side with the silver stripe matches the schematic symbol side that the 'arrow' in the diode symbol is pointing to. That's the only direction that current can flow. The output is then chopped in half so that the voltage only goes positive 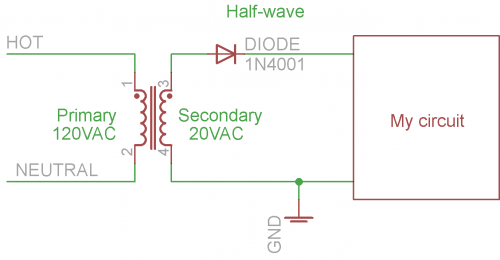 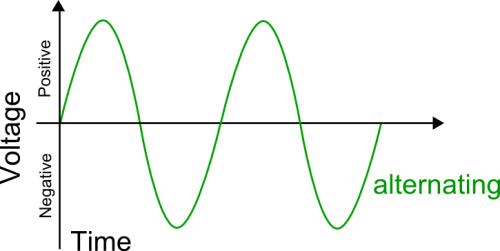 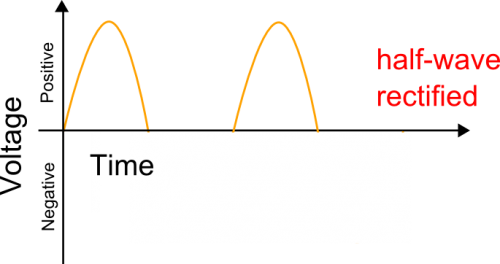 What we have now isnt really AC and isn't really DC, its this lumpy wave. The good news is that it's only positive voltage'd now, which means its safe to put a capacitor on it.

This is a 2200 microFarad (0.0022 Farad) capacitor, one leg has (-) signs next to it, this is the negative side. The other side is positive, and there should never be a voltage across is so that the negative pin is 'higher' than the positive pin or it'll go POOF

A capacitor smooths the voltage out, taking out the lumps, sort of how spring shocks in car or mountain bike reduce the bumpiness of the road. Capacitors are great at this, but the big capacitors that are good at this (electrolytic) can't stand negative voltages - they'll explode! 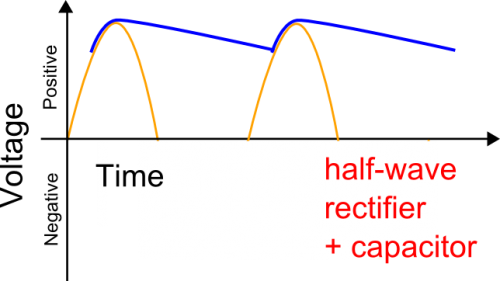 Because the voltage is very uneven (big ripples), we need a really big electrolytic-type capacitor. How big? Well, there's a lot of math behind it which you can read about but the rough formula you'll want to keep in mind is:

or written another way

For a half wave rectifier (single diode) the frequency is 60 Hz (or 50 Hz in europe). The current draw is how much current your project is going to need, maximum. The ripple voltage is how much rippling there will be in the output which you are willing to live with and the capacitor size is in Farads.

So lets say we have a current draw of 50 mA and a maximum ripple voltage of 10mV we are willing to live with. For a half wave rectifier, the capacitor should be at least = 0.05 / (60 * 0.01) = 0.085 Farads = 85,000 uF! This is a massive and expensive capacitor. For that reason, its rare to see ripple voltages as low as 10mV. Its more common to see maybe 100mV of ripple and then some other technique to reduce the ripple, such as a linear regulator chip.

So now we get: 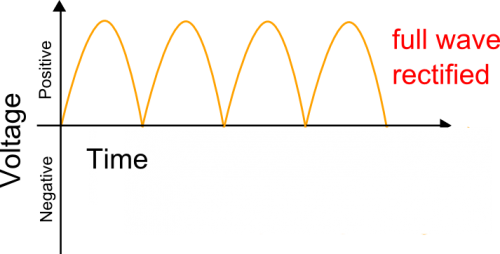 As you can see, there are twice as many humps - there isnt that "half the time, no voltage" thing going on. This means we can divide the calculated capacitor size to half of what it was in the previous. 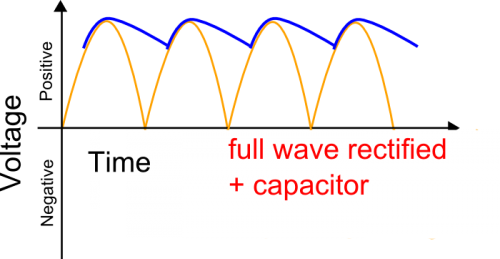 Basically, a full wave rectifier is way better than a half wave! So why even talk about half-wave type rectifiers? Well, because they're useful for a few other purposes. In general, you're unlikely to see an AC/DC converter that uses a half wave as the cost of the diodes makes up for the saving in capacitor size and cost!

The transformer AC/DC in practice 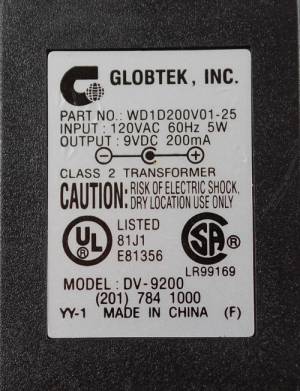 OK now that we've reviewed transformers, diodes when used as rectifiers and big capacitors, lets look at a chunky plugpack again. This time, we'll look inside by cutting it in half! This power supply is rated at 9VDC @ 200mA 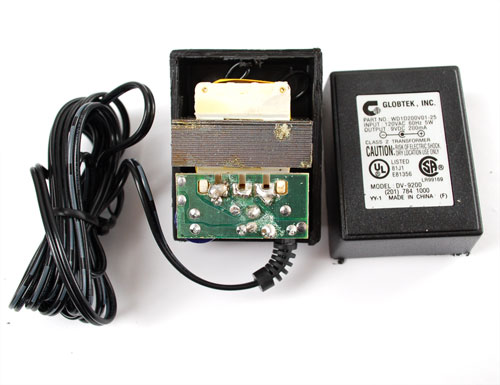 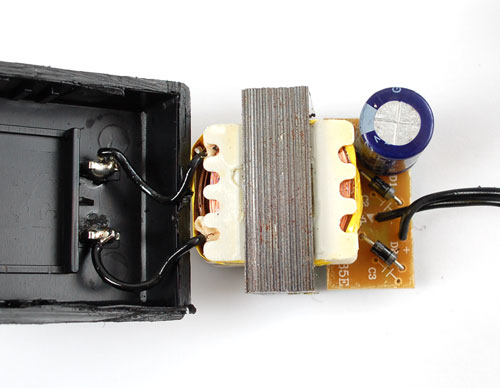 Wow so this looks really familiar, right? From let to right, you can see the wires that come into the transformer from the wall plug, the transformer output has two power diodes on it and a big capacitor (2,200uF). You might be a little puzzled at the two diodes - shouldn't there be four for a full-wave rectifier? It turns out that if you have a special transformer made with a 'center tap' (a wire that goes to the center) you can get away with using only two diodes. So it really is a full wave rectifier, just one with a center-tap transformer.

These transformer-based plug-packs are really cheap to make - like on the order of under $1!

So now we will take a fresh power supply (don't use one you sawed in half, of course) and measure the output voltage with a multimeter. Yow! 14V? That's not anything like the 9V on the package, is this a broken wall wart? No! Its totally normal! Transformer-based wall adapters are not designed to have precision outputs. For one thing, the transformer, if you remember, is made of coils of wire. The coils for the most part act like inductors but they still have some small resistance. For example, if the coil is 10 ohms of resistance, then 200 mA of current will cause V = I * R = (0.2 Amps) * (10 ohms) = 2 Volts to be lost just in the copper winding! Another thing that causes losses is the metal core of the transformer becomes less efficient as the amount of current being transformed increases. Altogether, there are many inefficiencies that will make the output fluctuate. In general, the output can be as high as twice the 'rated' voltage when there is less than 10mA of current being drawn.

Lets look on an oscilloscope, that way we can see in detail what is going on. 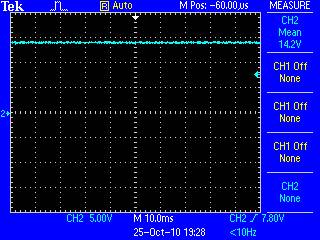 With no current being drawn on the supply, the voltage output is about 14V 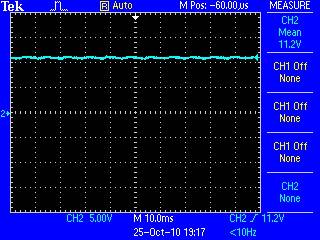 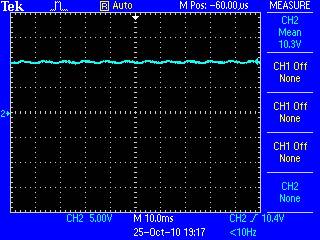 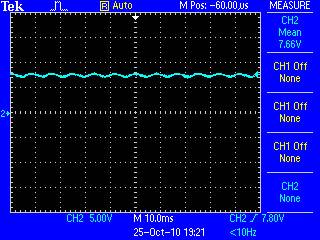 As the resistance gets smaller and smaller, the current draw gets higher and higher and the voltage droops (that's the technical term for it!) You can also see the ripple increase as the current goes up.

Now we can at least understand the thinking behind saying "9V 200mA" on the label. As long as we are drawing less than 200mA the voltage will be higher than 9V

What does this mean for you?

OK so after all that work, you're wondering why does this even matter? The reason it matters is that everywhere you look are these wall warts that are 'unregulated' and thus extremely suspicious. You simply can't trust 'em to give you the voltage you want!

For example, lets say you have a microcontroller project and it requires 5V power as many DIY projects do. You shouldn't go out and buy a 5V transformer supply like the one above and just stick the power output into your microcontroller - you'll destroy it! Instead, you will need to build a 5V regulator like the common LM7805 that will take the somewhere-around-9V from the transformer and convert it to a nice steady 5V with almost no ripple.

So here is what you should always do:

You might be wondering well why on earth doesn't someone make a power plug that takes a transformer and some diodes and a LM7805 and that will give you a nice 5V output instead of having everyone build it into the project circuit? While its an interesting idea there are a few reasons they don't do that. One is that the enclosed wall adapter would overheat. Another is that some projects need more than one voltage, say 5V and 3.3V both. But in the end, its probably for manufacturing simplicity. The factory that makes the wall plugs makes 100's of thousands in predictable sizes and rates, each country has plenty of factories to makes the right plug packs for the wall voltage and plug style. The designers of, say, the DVD player have an easier time of it when they can just say "anything above 7V and below 20V input will work for us" and the plug-pack maker matches them up with the closest thing they already make.

Nowadays, there are switch-mode power plugs that solve much of this problem. They are thinner and lighter than transformers and have almost no heating problems so they can have precise outputs that don't fluctuate. They are of course much more expensive than transformer-supplies, perhaps 5-10x the price, and have a downside that they're 'noisier' electrically. But, because the parts and assembly cost is going down, they're much more popular than they were even 10 years ago.