This mod is absolutely essential if you want your x0xb0x to be a bassline machine. It is a really good one to make! Change C21 and C20 from .01uF to .1uF. Some people have found that it gets too boomy if you use your x0xb0x for more of a lead sound, but you can either make it switchable or roll off the bass on your eq. 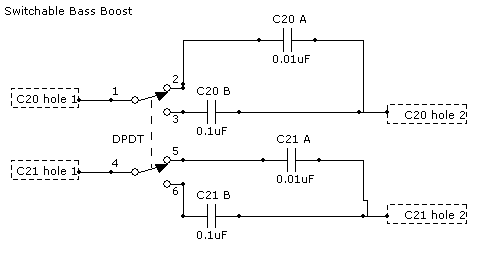 The DevilFish has a post VCA soft-clip distortion called "The Muffler" that apparently retains bass response.

Soft clip distortion is fairly easy to set up. You get a triple pole switch, and leave one of the poles disconnected, The other pole should lead to a diode going to ground. The other pole should lead to a pair of diodes going to ground, one of them reverse biased. The character of the distortion would change according to the diodes that you choose. You could change this circuit to double up on the diodes

This also might make a passive filter due to C38. 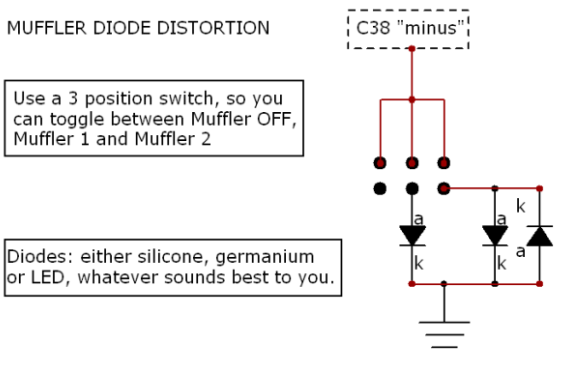 From the Guitar Effects FAQ:

Silicon is reputed to clip abruptly, causing a harsh sound. Germanium clips at about half the voltage of a silicon diode, but is reputed to turn on more slowly in its smaller range. LEDs turn on at about two silicon diode drops, and are also reputed to be slower turn on, with it and germanium giving more "tube like" sounds. Some units with "tube" in the title use LEDs or germanium for clipping.

Oddly enough, the Marshall JCM800 uses a set of two pairs of silicon diodes back to back as clippers. This seems strange in a Marshall, but it is there. When I looked at the schematic, I first thought it was a protective clamp for a tube grid, but the circuit doesn't work that way. They are there for the distortion.

If you perform this mod, please post your experiences with it!

Posted by Guest on the forums: