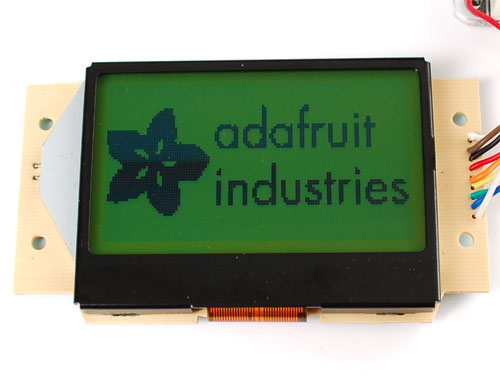 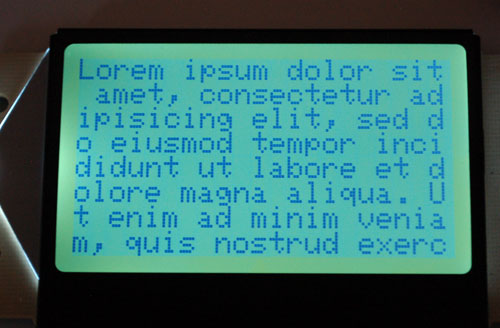 What it is...
Introduction

This mini-tutorial will go through the process of setting up a ST7565 LCD. These LCDs are graphical which means they can display pixels, not just text. This type of LCD in particular has 128x64 pixels, whch appear dark gray on a green-blue background. They have a backliight but can also be used without the light on for daytime visibility.

Another kind of LCD is the KS0108-type. These are not the same and are not compatible! Here are some comparisons

As you can see there are a few differences.

If you are using an ATmega168 or ATmega8 such as used in older Arduinos you must upgrade to a '328 to use this LCD. And if you're using a '328 note that half the RAM is going to the display so you wont have a lot left over. This pretty much means you can't use something with an SD card (like a Wave Shield or Data logger Shield at the same time you will straight-up run out of RAM and it will be wierd so dont bother).

We've written a tidy library for both C and Arduinoese, if you aren't using an AVR the C code is very portable and should take only a few minutes to turn into your favorite microcontroller.

Download it from github - click Download Source to grab it all. If you are using an Arduino, install the ST7565 folder which contains the library and an example sketch

We'll begin by soldering wires to the LCD. I'll use rainbow wires to make it a bit easier to tell apart but you can use whatever you'd like. The pitch of the connector is 2mm which means it wont fit into a breadboard but wires are easy to add on. 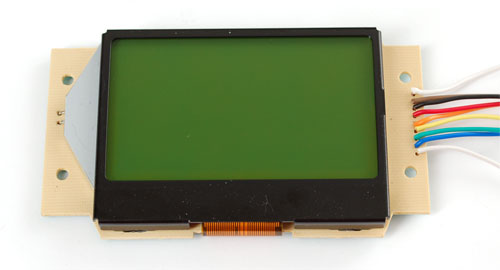 Here are the wire colors and the pins they go to: 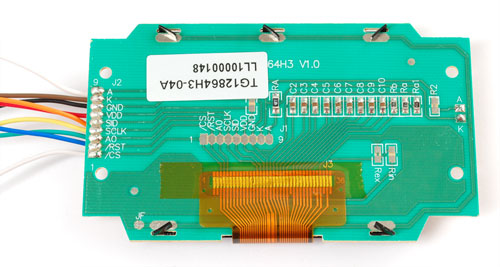 In this tutorial we assume you're using a 5V microcontroller such as an Arduino, if your chip is runninag at 3v, you can basically just ignore the 4050 and do everything else!

The 4050 is a chip that will convert the high voltage of 5V down to 3V, here is a diagram 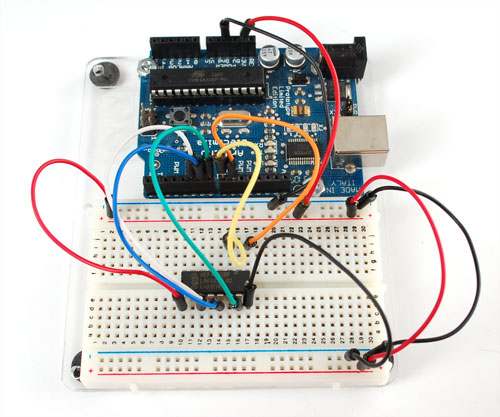 Now the 4050 is connected to the Arduino we can connect the LCD up. We'll start with the backlight (whch is optional) Brown (K) connects to ground and White (A) connects through a ~100 ohm resistor to 3V. You can also connect it to 5V through a ~270 resistor. Be sure to have some sort of resistor! 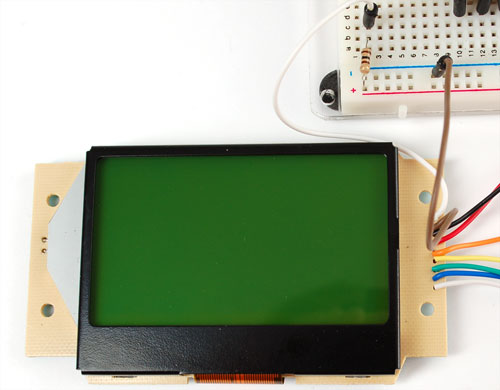 Finally the LCD power and data lines. Connect Red (VDD) to 3.3V and Black (GND) to ground. Then connect 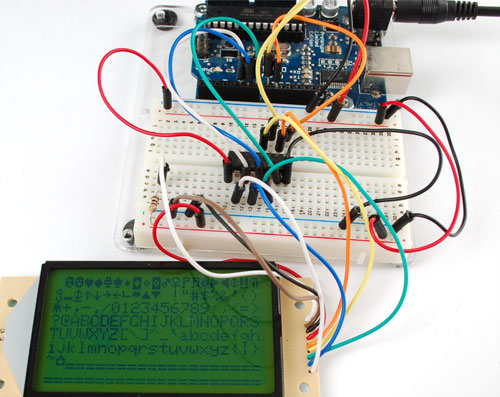 Now you can run the ST7565 example sketch in the library which will show off some of the many ways you can use the screen.