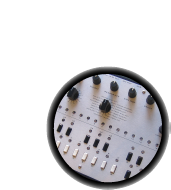 So, I'm back from vacation. We've sold all 100 kits of the first run and have ordered parts for the second run. Don't forget to put yourself on the waiting list! Second run should be ready to ship late sept/early oct. and we're going to try and push them all through in a month. Right now it looks like everyone on the waiting list will get one (assuming the same list/order ratio as before)

Also...more questions are answered below....

Listen to our newest set of samples and take the electric x0xb0x acid test!

Beta test successful...the final production run of PCBs have been ordered & should get to us in mid-April (or, hopefully, sooner). Which means we will be accepting orders in 2 weeks.

Almost all of the parts for the 100 kits are in from various distributors.

Beta kits are currently being worked on, the fab manual is up and should be functional although perhaps not so aesthetically pleasing

Cases are back ordered about a month, and getting the betas out took longer than expected...looking at perhaps at early/mid april for full release.

Ugh its 4am and I'm dead tired...but Mark is finishing up recording some mini-samples for your enjoyment and I'm no quitter. With luck, more samples will appear next week.

Last of the rare transistors (AN6562) came in today from Dalbani. Woo!

Beta-test PCBs have been ordered, final BOM and beta-test parts ordering is underway.

If you hadn't noticed, the website has moved to ladyada.net, which I hope will be less flaky. Both ladyada.net and the media.mit.edu versions are still up but not for long. Please update your links and refer to the x0xb0x page via "http://www.ladyada.net/make/x0xb0x". Thanks.

Dear readers, I've been getting a fair amount of email (which to be honest I wasnt expecting yet, this page was supposed to be just a place-holder) but I keep getting the same questions so...